BSTB's first film is now up on YouTube. Check it out.

I'm currently working hard on my final year project and dissertation. Because I did all the final year modules last year I only have the FYP to do which means the deadline is January 4th 2013. There's actually plenty of time to do it in and in fact too much time. I kinda miss the student life already because all I seem to do these days is stay at home and surf the internet when I'm not working. I'm a self-confessed procrastinator but I actually stuck to my schedule this year and got everything done. I set myself the target to film all footage in November and I got it done by the 23rd. The film is currently at just under 12 minutes long and is almost finished.

So yeah, basically it's about a guy who gets sent to prison and he gets harassed by this big scary inmate who wants £5 a week. The minimum wage for UK prisoners is 30 pence an hour so obviously this guy can't afford to pay up. It's not just this inmate who's picking on the main guy because a guard takes delight in making him suffer also. But he's got one friend inside, a good guard who is trying to look after him and keep him out of trouble. I won't spoil the ending though so just keep checking back and the film will be online someday soon.

I filmed a few scenes at my university and I even had support from the local police force to use some of their cells as a film location but red tape got in the way last minute. So, I bought a few MDF boards and made a prison cell set at my house. I stapled cardboard to the door and painted it a greyish/green colour to make it look like a cell door. On camera it looked okay so I was happy with it. I was then able to film the remaining scenes at home and it turned out pretty good. I also borrowed two 2000k lights from the University stores and these were perfect. Portable daylight almost and I managed to get perfect exposure throughout filming.

Obviously had a few problems which means I now have to do ADR (Automated Dialogue Replacement) since I was unable to record sound externally. The boom pole the uni gave me kept collapsing and you couldn't really control it in such a small area because it kept hitting things. So I thought screw it and just decided to do dialogue replacement at a later date. Visuals are pretty much done which means I only have audio left to do. My assignment is investigation into matching sound design to cinematography so yeah. I'm also gonna compose my own music for this film and that will be the last stage of production.

So far so good. Oh and yeah. I no longer believe that a no-budget film is possible. Yeah, I'm sure you can piss about with your mates and create a 2 minute movie for free and I did several of these a few years ago. But seriously, I've already spent close to £300 on this film. Purchase of props and costume came up to around £80. 1.8 prime lens, £55. Other equipment few quid here and there oh and I also hired a few actors. Hats off to them though because they agreed to do it for free but I paid their expenses which all added up to about £100. Consequence is, I've now only got £13 in my bank account. Looks like I'll have to use my credit card now or dip into my business account.

So yeah that's my life currently. I just wanna finish all this and do something useful with my life. Hopefully I can get a job in January when I finish uni. Someday I'll just fuel up my car and follow the sun and see where I end up. Or maybe I'll be able to finally renew my passport and get the hell outta the UK. I've also started sharing tiny bits of my wisdom on Twitter so if you want follow me @91beard.

I required a boom pole for my upcoming film so I went online as usual and searched for one on Amazon. I was getting prices of around £60 which I was not prepared to pay so I decided to make my own. I found a broken painters rod in my house which extended out to about 2 meters and had only cost  £9 when purchased. The threaded end where you attach the roller had snapped off which meant it would have probably been thrown away had I not got hold of it. First thing I did was file the end flat and I then used an epoxy called "JB Weld" to attach a nut to the end. In the morning, I was able to screw in a bolt and it was very sturdy and tight.

Next I needed to make some kind of microphone mount and I remembered the ones I had used at University previously. They are know as "shock mounts" because they suspend the microphone between rubber bands and keep it away from the pole. This prevents any unwanted knock or vibration from being picked up by the mic. Online prices for these shock mounts are between £10 and £30 but it's essentially a tube with rubber bands on it so I figured it would be easy to make my own.

I had this thick cardboard tube left over from something. It's about the length of a toilet roll tube but a lot thicker and stronger. I filed some slots on both ends to hold the rubber bands in place then carefully pushed the microphone in between. The friction from the rubber bands holds the microphone in place and it doesn't slide out. I also cut a hole in the side of the tube wide enough to accept the bolt. I could then screw my homemade shock mount into the end of the pole. I then wrapped some more rubber bands along the length of the pole to hold the XLR cable in place. I then plugged it into the end of the microphone and it was good to go.

I set everything up and began a test. I had headphones on so I could clearly hear everything that was being recorded. I moved it around, shook it a bit, banged the pole and the shock mount did its job perfectly. Extending the pole isn't as easy as a store bought one because you need to adjust the rubber bands holding the cable but once you have it at the required length, it works just as well.

After using DSLRs to shoot University assignments last year, I decided to get one in the summer. Many filmmakers are aware of the DSLR video revolution and a lot of them are actually using them now instead of video cameras. Basically, with a DSLR you can shoot full 1920 x 1080 HD video at 24 and 25 frames per second. The large sensor records an amazing amount of detail and the fact that you can use Canon lenses provides a filmmaker with far more options than those using a dedicated video camera.

Canon appear to have taken film making into consideration when they released the 600. This camera has a flip out LCD screen (typically found in a video camera) and an external mic port. There are also many accessories out there which can "turn" your DSLR into a dedicated movie camera. I got mine with the kit lens which doesn't really go down well with most people. Other students and lecturers advised me to get the body only and then buy a separate lens. I ignored them because I wanted to be able to use my camera straight away.

The kit lens does feel cheap sometimes and the aperture doesn't open up that wide. In daylight this doesn't matter but shooting inside without adequate indoor lighting will force you to up the ISO. A greater ISO in turn will make your video more grainy so it's not a good idea to rely on it. The kit lens does zoom, a little bit. I've used it and I like it most of the time but sometimes it does feel limited. It has to be better than making a pinhole "lens" though?

So, with all that said I am currently shopping around for a new lens to add to my collection. I want to purchase a prime lens (that's a fixed focal length, no zoom) and more specifically I'm looking at Canon 50mm 1.4 and 1.8 primes. The numbers refer to the aperture stops and the lower the number the better the lens. The Canon 1.4 costs around £229 new while the 1.8 is about  £90 new. Having just spent £400 to get my car back on the road, I'm leaning more towards the cheaper 1.8 now.

A low f-stop will give you that nice blurry background and it will also let more light into the camera. However, focusing your camera at that kind of level will require great skill and patience. It would be almost impossible to focus correctly with just the camera's LCD screen alone and you'd probably have to use an external monitor to keep things nice and sharp. With the 1.8, you lose that extra 0.4 but chances are you won't need it if your scene is lit correctly.

My advice would be to get a 1.8 prime lens if you're new to DSLR filmmaking. However, if you're rich and can justify spending more than £200 then go for the 1.4.

I've finally got the ball rolling and started putting my film production company together. With one more year of uni left, I've decided that I want to offer a special effects service to other film makers when I graduate. My service will include the compressed air blood hit effect (as seen on  this blog) and also compositing of CGI muzzle flashes/smoke/sparks etc onto footage. Check out my website below.
http://www.bstb-film.com/
Posted by Ben at 14:24 No comments:

I created this track a few months back and figured it would make a suitable theme for a movie.

This is the faux trailer I did for my HND project back in spring 2011.

The Vigilante trailer from Ben on Vimeo.


I shot this on a Panasonic HDC-SD9 and edited it in Adobe Premiere Elements. Visual effects we created in Adobe After Effects.
Posted by Ben at 12:01 No comments:

The following videos are animations that I made in Adobe After Effects. These were for my Advanced Visual Media Applications module.

Overall, I was pleased with how these turned out but I feel I could have done better with the portal one.
Posted by Ben at 08:14 No comments:

I thought I'd go ahead and post all my film and video work from university. This is a short film I did for my cinematography module back in December 2011. I got a 2:1 for it.

Well it's been something like 4 months since my last post and a year since I first started this blog. I've just finished my third year at University which means I've now got 4 months off. I've got my dissertation to do next year before graduation so I need to think of a specific area of film making to study. I also plan on spending the summer working on my feature film. This film has been in pre-production for 3 years and I've only got a few minutes worth of footage. Hopefully I'll have enough footage for a trailer this summer.

I'm not revealing anything yet but I'll post this screenshot from the opening title sequence. It's probably obvious what genre the film is so I won't say anything else. More updates soon. 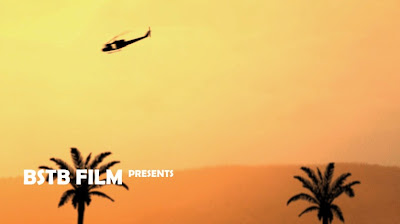 My latest music composition to come out of FL Studio.
Posted by Ben at 12:08 No comments: