I always end up broadening my horizons and trying out new things. I discovered FL Studio a few years back and it's an amazing piece of software which allows you to create your own music tracks. There are so many plug-ins available to download and a quick YouTube search yields thousands of videos showcasing creations made my FL users. I fully recommend it to anyone because it's very easy to pick up and use. Download the demo here:
http://flstudio.image-line.com/
The demo is fantastic because it allows you to do everything that you can do in the full version. The only disadvantage being that you can't save your projects (But you can still export to WAV and MP3 format) The developers also have varying levels of cost associated with their product. The express edition will cost you £36 and the other versions feature less restrictions at a greater cost. I like to mess around occasionally and come up with random songs whenever a tune comes into my head. This particular one was made as a tribute to a friend and features his voice from a video we made:
Posted by Ben at 03:17 No comments:

Prop guns, effects and the VCRA

Once upon a time you could freely purchase realistic replicas of firearms in the United Kingdom but since 2007 selling was restricted to certain people who qualified for exemption. Thankfully, purchase of replicas for the purpose of film making was preserved and this is what I'm going to write about today. Unfortunately, unless you happen to be a Film Production Company you'll find it very hard to purchase since merely saying "I'm going to use it in a film" isn't enough. So, you're filming the action movie of the year with your friends and suddenly you realise that your script requires an intense fire fight between two rival gangs. You all stand around scratching your heads wondering what to use as guns. Well, fear not because hopefully I can help! We'll start off with the easiest option then work our way up to the hardest.

Ask around:
You'll be surprised because thankfully the Violent Crimes Reduction Act grandfathers replicas bought before the 2007 date. Maybe someone you know owns a few and will lend them to you for the duration of your film shoot.

Make them:
Since film making was stated in the Act as an exemption you could always test your creative side and make replicas out of cardboard or wood. Print a 1:1 scale picture of a gun then use that as a template. You can probably make a few in a day and they should look okay on camera. Unless you're good at arts and craft chances are your gun wont look that realistic up close so try and be clever when you use this method. Have quick camera shots of your actor shooting and hopefully your audience wont notice it's a lump of cardboard.

CGI:
Maybe if you're a wizz at computers you can film your actors "pretending" to hold guns and then create a 3D model on the computer where the firearm should be. Chances are it'll look too fake but it might be worth a shot (sorry, bad pun).

Buy what you can:
Good news is you can still buy non-realistic replicas. These are basically the exact same size but they come in bright happy colours like green, blue and orange. You'll ask "But how can these pass as real on camera??". Well, most editing software has a colour key effect which you can apply to your video clips. Say you've got a bright orange gun and you've just shot an action scene you apply the colour key filter then select orange for removal. And depending on your software, you should be able to desaturate and adjust brightness on the orange areas so the gun then becomes black. This method might be the most cost effective way of putting prop guns into your films. Search for cheap BB guns online and you can buy accurate replicas of modern firearms in bright colours. http://www.justbbguns.co.uk/ is a good place to purchase from.

Pre-1870 designs:
Also, replicas based on a design from before 1870 (not 1970) are allowed to be purchased by anyone which is good news if your film's going to be a western.

Become an air-softer:
Alternatively, join an Airsoft skirmishing site and by running around a forest and getting dirty for a few times a year you'll qualify for VCRA exemption! This means you can purchase as many realistic replicas as you want.

Start a Film Company:
If you don't want to run around a forest and get dirty a few times a year then consider setting yourself up as a film company. This really only makes logical sense if you're serious about filmmaking (Like me). Set up a business account with your bank then visit http://www.companieshouse.gov.uk/ to register your company. Hire some friends as employees then fill out the necessary paperwork and so on. You might need public liability insurance though so do your research and ask around first. Once you get past the headache of setting up a business you can purchase replica guns online. I suggest buying off http://www.plugfirecapgunsuk.com/ because they stock a large range of blank firing replicas which provide extra realism on set.

And now for a bit of advice. If you use anything that looks like a firearm please don't wave it around in public and ensure that everyone around you knows that it's a fake gun. Next post I make will be a tutorial showing you how to add gun effects like smoke, muzzle flashes and shell casings to enhance your action scenes.
Posted by Ben at 15:08 No comments:

Chances are you've seen this effect in action or war films. A Character gets shot and their chest rips open spraying blood everywhere. In Hollywood, this effect is almost always done using a small explosive charge called a 'squib'. Basically, the actor has a metal plate fixed to their body and the explosive charge is attached to this plate and then a bag (or condom) filled with fake blood is taped on top. Detonation is done electronically and when the time comes for actor to get shot up, a special FX technician would flick a switch and BANG. Blood everywhere.
This effect is very impressive but has a number of problems. Firstly, using explosives requires a certain degree of expertise and might cause serious injury if done wrong. They're also very expensive and complicated. Unless you've got a 5 figure budget don't consider using explosives to simulate bullet hits. I've seen countless YouTube videos where people have taped firecrackers to their chest with a blood pack on top and then lit the fuse. First of all, you'll see the smoke and sparks through the shirt as it burns down and second you can't judge how long it'll take before the thing goes off. This method just doesn't work well and if you live in an area where fire crackers are illegal then you can't do it anyway. The method I use is cheap, safe, simple and best of all looks great if done correctly.
5 years ago I watched Peter Jackson's Bad Taste and was amazed. Peter Jackson (the very same guy who directed Lord of the Rings) worked on this film for four years and on a shoestring budget. It contained a lot of impressive special effects including dozens of blood splatter. I spent a lot of time trying out blood effects and I found this brilliant website showing you how to do a blood spray effect using a compressed air pump. Unfortunately this website no longer exists but there are plenty of tutorials around which explain this effect in greater detail.
You basically purchase one of those pump up insecticide sprays. If you're serious about film making you'd pay for a new one instead of using an old one that might be contaminated with nasty insecticide and could kill your actor. You then use a length of PVC hose that has one end sealed and a hole made on the side. This tube is then taped to your actor and the little hole is aligned with a cut in the item of clothing which they'll be wearing. Stuff the hole with small pieces of sponge to prevent the fake blood from coming out prematurely. 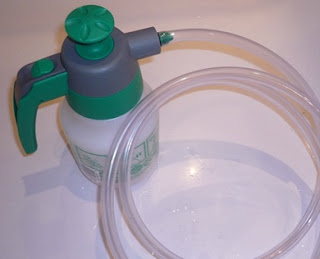 You then pump up the sprayer and I recommend you do it 150-200 times to get enough pressure. High pressure will ensure the blood sprays out like a cloud instead of just leaking out like a tap. You then attach the tube to the sprayer like the picture above and when you're ready press the trigger down and the air will be released and spray fake blood everywhere. I've tried this out several times with varying levels of success. The trick is to keep experimenting until you find the best combination of fake blood, pumps and tube position.
And here's the finished effect which I did for a university task. Thanks to my brother for allowing me to shoot him.

Squib Test from Ben on Vimeo.

Life as a Film Maker

I've been making films for several years now. I'm actually studying film at university and it's something I'm considering as a career. Before University, most of my knowledge evolved out of curiosity. I would learn about certain techniques and watch films then attempt to replicate them using what I had available. These days it has become so much easier thanks to the internet and high quality consumer technology. I urge all those who have a keen interest in film making to pick up a camera and get creative. I hope to make regular posts on this blog that will share film making tips, information on current projects and general film making ideas.
Posted by Ben at 10:33 No comments: